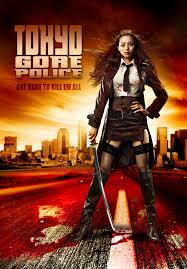 That poster doesn’t even get close to describing the film. Anyway, here’s the “plot”

Set sometime in the future, the Tokyo police force has been privatised. A young girl who watched her father die has become a police officer herself, and expert in hunting “engineers”. Engineers are some kind of super mutant who’s body morphs in to weapons when they are injured. The girl sets out to find the source of the engineers and get revenge on the man who killed her father.

I THINK that’s the plot, it’s hard to tell as the whole thing is a giant mess.

Tokyo Gore Police’s blessing and curse is that it has a limited budget. This is a curse for some of the good ideas in it. The police uniforms are pretty bad ass, Samurai style outfits mixed with riot gear. The odd bit of high tech paraphernalia though we never actually find out what it does. They’ve also borrowed from Robocop/Starship Troopers and have fake adverts littered throughout the movie that could have done with looking a bit better. The police radio room operator, for want of a better description, is also interesting. A kind of DJ type sexy character.

The blessing is that the level of gore in the movie would be pretty much impossible to stomach, at least for me, if it was realistic. In the opening couple of minutes a guy loses his arm, which grows back as a chain saw Lynchian mess, which then severs a few heads. Gallons of claret all round. Then our heroine uses a bazooka to get up to the floor he’s on, dices bits of his face with a chainsaw then cuts him in half was a samurai sword. All relatively fine in a hyper mad Troma way. In fact the movie that’s presented in the first 20 or so minutes kind of has a plot, is pretty gory but nothing too bad as it’s hyper stylised (gushing blood all over the place) but it doesn’t keep this up.

Plot goes completely out the window at intervals, then kind of comes back, then doesn’t matter so much as your brain has stopped working. There are huge amounts of distorted body parts. A hooker (this scene just came out of nowhere and it’s like we’ve left the movie for a bit) bites off a guys junk, he shoots her in half and her bottom half grows back as a crocodile. Luckily he becomes an engineer and his dick grows back as a giant elephantine penis gun affair.

Most of what I’ve described so far actually sounds like it’s part of a mental and kind of fun movie. For some reason I can’t put a finger on it isn’t. It drags. I’m not a huge horror nut but I’ve enjoyed some crazy ones, this one commits the crime of not being all that fun really.

Okay acting from most involved, decent enough cheesy effects for what they are, some imagination, an annoyingly repetitive score that seems well done to start with and some inventive ideas. But it doesn’t mesh together properly. More than anything else it BORED me. I wanted to stop watching because I couldn’t be arsed, not because I couldn’t take any more horrific imagery. Only watch this is you’re a die hard fan of this kind of thing. If you just dabble like me try and find Battle Heater. It has demon table heaters for an enemy and it’s mental. Or go watch Battle Royale, it’s ace. Otherwise just save yourself the damn near 2 hours that this takes from your life.

There’s a trailer here. It’s not even close to safe for work or for those of a nervous disposition. And it doesn’t help make the film make any sense either as it seems to just be a bunch of disjointed clips. Mind you, so did much of the movie…